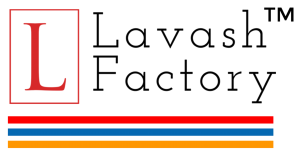 The Lavash Factory is committed to maintaining the legacy of the many generations of Armenians who protected this unique flatbread throughout the centuries and passed on this tradition to the modern era. We continue creating our lavash with absolutely zero artificial ingredients or harmful additives. Keeping the traditions alive and delivering the thinnest, silky soft lavash to every table.

Lavash bread is surrounded by many legends from the middle ages, including one that tells the story of the Armenian King Aram. King Aram was captured after a battle with the King of Babylon, Nebuchadnezzar but the defeat in battle was not enough for the King of Babylon. He declared to King Aram, ‘I will deprive you of food for 10 days. On the 11th day, you and I will compete in archery. If you win, that means you are the stronger king, and I will let you go’.

Throughout the night, Aram thought of a plan and finally, he asked for the most beautiful shield to be brought to him from his troops. Nebuchadnezzar did not object and his messengers went to the border to convey Aram’s wish. At first, Aram’s servants were puzzled by their king’s request – he didn’t need a shield. Then they realized his plan. They packed the inside of a shield with thin pieces of their bread, called lavash and handed the shield to the messenger. His enemies unaware of the lavash hidden inside, brought the shield back to Aram. He retrieved his lavash, inspected the shield and exclaimed, ‘This shield is not good enough. May I have another sent?’

And so for 10 days, lavash was secretly brought to King Aram, sustaining his body and his spirit. On the 11th day, Aram and Nebuchadnezzar prepared for their archery competition. Despite Nebuchadnezzar’s confidence that Aram must be weakened from starvation, he was sorely mistaken. Aram won by far and returned to his country with honor. Saved by lavash, he returned to his country and decreed that only lavash bread will be baked in Armenia.”

The Lavash Factory believes in carrying on this legacy. We also believe in the power of respecting nature, and therefore only use simple, natural ingredients to create our lavash bread and bake it fresh in our Sylmar bakery.